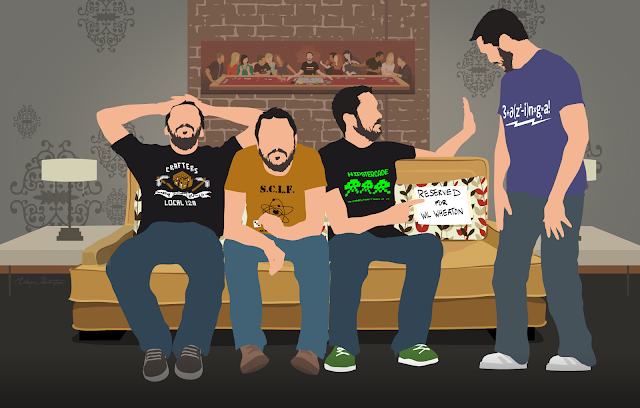 NEW!!  Once again, Geek & Sundry have been AWESOME and let me officially sell prints of the new artwork. They rock!!

YOU CAN BUY PRINTS OF "TABLETOP SEASON 2 - WIL WHEATON ON THE COUCH" - CLICK HERE!


After talking with the show's producer, I supplied artwork for Wil Wheaton on the Couch - for the possibility of it being in the show.

Well BIG NEWS!  Wil just posted photos on his blog from filming on the set.. And look what's in the background!!

Can't believe its been a year since I spend a quiet Christmas creating the Wil Wheaton Last Supper illustration, and things wen't mental!  I posted it just as a comment on Wil's blog, and he replied saying it looked awesome - and then he tweeted the link to it! I got a massive response from fans of the Geek & Sundry show, and lots of requests to buy prints - which I couldn't do without permission from Wil, Felica and Geek & Sundry.

And then I was contacted by the Producer of the show! They asked me if I would mind if they used a print of the artwork on Season 2! That was a fast decision. I signed an agreement, and it now sits behind the Loser's Couch at the end of every episode - it was even talked about during the live stream last year.

And as a wonderful ending to the story, Will, Felica and Geek & Sundry gave me permission to sell the print - which was really kind of them.

You can still the Tabletop Last Supper Print here

Season 2 of Tabletop is still underway as I write this, but with another quiet Christmas, I had an idea for a new artwork, which features on of the on-going gags in the show, namely that Wil doesn't win that often! So in this new artwork, I follow that through to its natural conclusion... or is it?


Isn't that Wil Wheaton being turned away from Loser's Couch? Hmmnn..

I couldn't resist putting the Last Supper artwork in the background (hey, that's where it lives for real!)  Hope you like it.
Labels: Illustrations tabletop